In two weeks the state of Indiana will have a primary in which voters can decide who will be on the November ballot and decide a variety of other elective offices and issues. Unfortunately one thing has not changed in this internet, non paper based age.  The proliferation of political yard signs posted in every vacant piece of land seems to have increased. 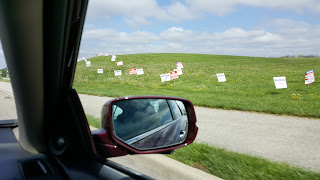 As the above photo shows, no I wasn't driving and taking photos at the same time, the yard signs of politicians have mysteriously sprouted up cluttering every vacant landscape with small and huge signs touting the name of the politician and the office they are seeking election to.  Some signs are clustered together tightly.  Some stand in solitude, a lonely testament to the American political process.  A process which for several weeks allows landscapes to be littered with no apparent concern regarding how the signs spoil the natural environment.

If it was trash being thrown on the ground, well maybe some of the signs fall into that category, fines would be issued and people prosecuted.  But because these trash stapled to a wooden stake signs somehow support the electoral process, they are tolerated.  But how exactly do these signs help to gather votes for candidates?  Well, the signs publicize the name of the candidate/litterbug seeking election.  The signs also tout that you should vote yes or no for a local issue.  The signs don't say why you should vote for an issue or a person so maybe the reasons are irrelevant?

The signs are kind of colorful.  They sometimes elicit a response from those who see them.  Some people tear the signs down because they do not like the candidate or the stand a sign may take on an issue. So in that respect the signs support exercise and a release of built up tensions.  But stealing or tearing down signs also costs the candidate money.  So if you tear a sign down at least mail a few dollars to the candidate to compensate them for their loss!

But back to the question.  What do these signs do to enhance the chances of victory for a candidate or a cause?  I think they do nothing except help us recall the name.  Especially on election day.  As you walk up into your polling area, signs are on each side of the sidewalk to the point where you marvel at the number of signs able to be posted in a small area.

Then what happens to all these signs after the election?  Are they recycled to save 8-9 trees?  If not it seems a waste of poster board.  If not yard signs then what?  Well, can you imagine being bombarded with unwanted political emails and political advertisements popping up in all the apps we use? That would be a positive as our smart phones would be disabled by the sheer volume of political ads and we would actually have to talk to each other more.

As you make your drive around your town, safely count the number of yard signs you see.
Posted by Arnell Hill at 6:22:00 AM No comments:

The New Customer Service - Do It Your Self

Now in some restaurants they have on the table a device through which you order your meal and pay your bill.  They've cut human contact with a waiter or waitress to the bare minimum.  That being if you encounter a problem. So your table service is as good as you give yourself.

So I ask what's next?  It's got to be the hotel industry.  In the near future you will have hotels where you make up your own bed or change the sheets, vacuum your own room, clean your own bathroom and take your dirty towels down to the laundry to exchange them for new clean towels.  Then you can tip yourself based on how well you think you did.

What this offers is the opportunity for all of us to gain additional skills that we used to pay for others to do for us.  It expands our job resume and skill bank. So, the next time you are given poor customer service, just smile, say thanks, and wave bye to the worker because in a matter of time they won't have a customer service job anyway to perform poorly at.  You will have it!  An additional skill to your growing arsenal of do it your self skills.
Posted by Arnell Hill at 11:49:00 AM No comments:

Email ThisBlogThis!Share to TwitterShare to FacebookShare to Pinterest
Labels: customer service, do it your self

Here we go again! "The Greatest Country In The World"

Yes, in the United States there is opportunity to have a relatively financially secure lifestyle.  Plus the opportunity to indulge in and enjoy a variety of leisurely activities.  There is a general opportunity to at least pursue your life passions.

But, there are conditions in the United States that don't seem worthy of being under the umbrella covering of the "greatest country in the world".  Despite the overall abundance of wealth in the United States, 16% of the population live in poverty.  That means that 16% of the population doesn't eat as well as you and I.  That means that some of the fun activities you and I regularly do are beyond the financial reach of those in poverty.  The notion that these 16% are solely responsible for the impoverished conditions they live in has not been proven as being correct.

It is a fact that drug abuse, and the crime rate in many metropolitan areas are out of control.  Does that mean that a 16% poverty level and outbreaks of crime and drugs in select communities are acceptable levels and conditions for a great country?  Does a country's greatness stop if it reaches a 20% poverty level and only 10 metropolitan areas exist with crime above a certain percentage?  In addition, in terms of addressing mental health issues the United States does not stand out as being the poster child country with the best programs to assist those with mental health issues.  Ask the family of those who have relatives murdered by someone with a mental disorder.

I respect the right of people to make "the greatest country" declaration.  But you and I know it's just a patriotic, ill informed, biased statement at best.  Maybe it's a part of our competition gene.  The need to be better than someone else.  Or the "I'm Number One" syndrome.  The greatest country declaration exist because we do not have the ability to think in collective terms.  World goals are drowned by the oceans of selfishness that the world promotes.

In the upcoming Summer Olympic games we will likely see the usual graphics by the media that track the number of gold, silver, and bronze medals won by each country.  The celebration of the individual athlete's accomplishment will be overwhelmed by narcissistic flag waving.  Why are the flags thrust into the athlete's hands anyway?  Why can't the athlete hold up their favorite beverage, package food item, etc. and give those items some commercial time, with appropriate financial compensation? No, instead they have to carry a flag around to promote the superiority of their land.

But on the other hand, if the athlete gets a thrill out of carrying and waving a flag around good for them.  I'll just change channels, go to use the restroom or go jogging and promote my health and wellness.
Posted by Arnell Hill at 11:20:00 AM No comments:

Issues of the Day - Mine and What are Yours?

In this Presidential election year, candidates are talking about a variety of issues.  In this world there are numerous issues to address.  What are the most important issues?  Well, it depends on whom you ask.  We all have experiences, biases, likes, and dislikes that determine what we care about in this world.  It would be difficult for 10 people let alone millions of voters to come up with a list of top 10 issues that were the  exact same in terms of priority.  Sure, you might get the same 10 issues in a different order of priority.  From my personal views these would be the top issues of the day.

1.  Development of a mental health policies to assist in helping people not to become a danger to themselves and others;
2.  Protecting people against terrorists of all kinds;
3.  Rebuilding infrastructures in communities;
4.  Developing relationships with other countries;
5.  Taking care of the environment;
6.  Caring for the elderly;
7.  Finding the cure for cancer;
8.  Improving deficient educational systems;
9.  Outlawing "hate" groups.
10. Finding a mechanism to truly listen to the concerns of people and responding to those concerns.

What all my issues have in common is that investing in any one of them has the benefit of helping a variety of people.  Each issue does not have a selfish economic benefit for me personally.  Instead resolution of any of the issues has the benefit of making conditions better in a variety of ways in this world.  For example, improving educational systems will assist people to develop natural gifts or learn new skills that will make them marketable to one day obtain a job.  Finding the cure for cancer will save many families from the grief of losing loved ones.  Taking care of the environment is something we should be doing as this world was originally given to us by our Creator for us to maintain it.  Developing relationships with other countries reduces the suspicions and fears we have of each other and helps to bring us to realize that we are all connected. Then maybe we can expand our ability to solve problems if we work together.

Many people get involved in addressing an issue based on the impact the issue had in their lives. For example, someone whose parent(s) had Alzheimer's may get involved in fundraising work to find a cure for Alzheimer's.  Another person may get involved in an organization based on an illness that impacted a loved one or family member. Personal experiences often are a huge factor in what we become involved with or care about.  There is nothing wrong with being influenced by a life event to "care" about an issue or a cause.  We gain knowledge during the events that causes us to care.

I challenge you to think about the top 10 issues that you care about and why.