Election Day.  Or even on early voting days.  Long lines at the polls.  The self proclaimed greatest country in the world has yet to develop a system that eliminates long voting lines at the polls.  So what is the answer?  Devote more resources to the current systems?  Create a hacker proof system of voting that uses state of the art technology?   Recent legislative actions related to voting have only resulted in additional types of personal identification being required prior to a person voting.  Some say those laws have simply made it more difficult for people to vote.  The intent of these "voter ID" laws supposedly was to reduce instances of voter fraud.

Well now it's time to reduce the time it takes to vote.  There is no reason why a person should have to wait in line several hours to vote.  If we can stream television shows into our televisions and personal devices anytime we want, I'm sure there is a way to allow people to vote without having to stand in line for hours or to even leave their home or place of work.

What will it take for the current systems to be changed?  Apparently we are waiting for a massive failure on a larger scale than what happened in Florida during the 2000 Presidential election.  For those of you to young to remember, use your favorite search engine for a recap of a failure that decided the political direction of our country.

I would love to vote from the comfort of my home through a secure website, while I'm watching the morning news, or favorite television show.  Wouldn't you?  We can send people to the moon but can't create a tamper proof technological voting system?  Something is wrong with that statement!

Urge your Congressperson to seek national reform of our voting systems.
Posted by Arnell Hill at 5:11:00 AM No comments:

Diversity Not A Concern - Images on the Wall

Several months ago I became a member of a nearby fitness center.  The Center is under the umbrella of the Hancock Regional Hospital.  The facility is equipped with the latest fitness equipment and also includes a pool, basketball court, and sauna rooms.  My main reason for joining was to take advantage of the indoor track, especially in the winter time.

During my initial visits to the center, I noticed that most of the clients were older people like myself.  Unlike me they were more on the European American side of the human being equation.  My ears quickly picked up that the background music being played as people worked out was music that European Americans like.  In response to my asking what satellite radio station was being played, I was told that it was a Pandora "classic rock".  That explained why the only song I heard by a black artist was one by Jimi Hendrix, legendary guitarist from the 1960s early 1970s.

My eyes quickly noticed that the photographs on the wall around the indoor track all depicted young European Americans exercising vigorously.  It was in direct contrast to the older European Americans and myself who were the normal clients of the center.  So, I sent a letter to the manager of the facility pointing out that the images prominently displayed along the wall did not reflect the reality of the paying customers who are using the fitness center.  The response I received mentioned the music being played reflected the demographics of the inhabitants of the community.  The photographs I was told were based on the design of an architect and reflected his/her vision.

The architect's vision obviously did not see minorities or older people using the center.  Anyone who uses the center will notice the giant photos and get the message quickly.  The architect apparently believes that the world consist of only youthful looking, thin European American life forms.  The response I received from the center did not express any urgency to modify the images on the wall.  Their was no acknowledgement that maybe I had a point and that other images should be added along the wall.

My conclusion was the response basically was saying, "yeah, you're right, but we like the images on the wall and don't plan to change anything."  It's nice to know what to expect.  When I stop by the center, I always have a set of headphones to play the kind of music I want to hear.   When I walk into the center I quickly note that every day the clientele are older adults, some likely retired like me, who are just trying to keep their bodies in shape.  When I do jog on the track I ignore the photographs of the youthful European Americans and focus on what I am doing.

I find it amazing that a simple decision on placing images on the wall of a building could exclude acknowledging the diversity of people in a community.  It lets me know the thought processes of the architect who designed the interior.  It just shows that even the educated still have much to learn.
Posted by Arnell Hill at 12:32:00 PM No comments: 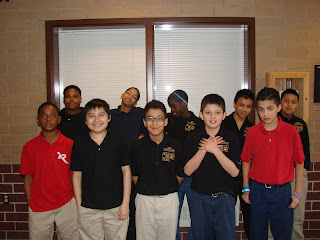 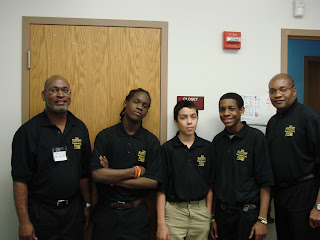 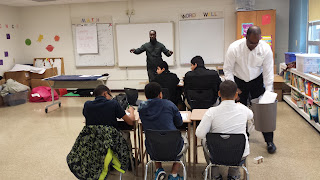 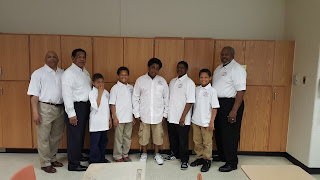 No Rest for the Rested - NBA Playoffs With all Playing

I'm watching the first round of the NBA playoffs.  Why?  It's the only time when it's a guarantee that the stars of the teams will be actually playing for the ticket paying fans.  After hearing how a number of teams have rested star players during the season, I was surprised to hear that the NBA had another record breaking attendance season during the past year.  Those fans who value their money being spend wisely should be upset when they pay premium ticket prices to see the stars of opposing team.  This is especially important when many teams have raised ticket prices for those games featuring premium star teams such as Golden State, Cleveland, and San Antonio.  Several times these fans have put out the money, paid the high parking fee, and high concession prices, sat in their seat and then heard the announcement that the opposing team would be resting "so and so" for that game.

In such a situation what is a fan to do?  Go to the box office and ask for a refund?  Stay and watch the game featuring the replacement bench players?  After spending $100 plus you know the fans are not going to just go home empty handed.  So the fans hang around and make the best of the situation.

The NBA commissioner recently came out with some innocuous response to the issue of teams resting star players.  In the last week of the season the Brooklyn Nets who were out of playoff consideration actually rested several of their starters in a game that had some playoff considerations.

With all that resting going on, the NBA still broke an attendance record!  What does that say about the fans?  I guess for those able to afford the price of an NBA ticket, it's only money.  There does seem to be some level of disrespect by the players to the fans paying the high ticket prices.  As Tony Kornheiser of PTI said, "If there was a living, breathing, commissioner in the NBA, something would be done about the situation of resting players."

After attending NBA games for at least the last 10 years, I did not purchase a ticket to any NBA game this year.  So the NBA lost my money for at least 4 games.  But as the attendance figures show, the NBA probably could care less.  They got some other victim who paid full price to attend a Cleveland game where Lebron James rested.

Tips for fans who don't have the extra money to throw at the NBA.  If you want to see the star players, buy tickets for one of the first 10 home games of your team's schedule.  Most teams wouldn't dare to rest a player during the first two months of the season.  Avoid buying tickets at the end of the season, unless your team is actually trying for a playoff spot.  Teams notoriously rest star players once they have solidified a playoff spot.  After the first 10 home games you risk going to a game and finding out that a star player, in his 20's, is resting.

Or do like me.  Invest your money into a nice vacation by a beach.  You know the beaches where your star player goes to rest after the season is over!
Posted by Arnell Hill at 1:51:00 PM No comments: