A Tribute To Angela Williams

I recall the day I first met Angela Williams.  It was about 14 years ago at a U.E. Homecoming weekend. It was a crisp, cold, but sunny fall morning in Evansville. The leaves on the trees announced in their orange-reddish colors the arrival of fall.  I had parked my car in a lot near the Engineering building and was walking across the circle.  From afar I saw the sign in table set up outside the Union building.   I noticed Sylvia DeVault at the table.  The table had been equipped with hot apple cider to serve the alumni and to keep the table workers warm.  Then I noticed that there was an African American woman sitting next to Sylvia!  I strained my eyes to see who was this?  I then found myself jogging in slow motion over to the table, thrilled at the prospect of an African American being added to the alumni office.  It was like a scene out of the movie "The Color Purple" where the Whoopi Goldberg character is in the field playing patty cake with her friend.  I was mentally clapping my hands and playing patty cake while jogging over to the table in slow motion.

I made it over to the table and composed myself into professional alumni mode.  I gave Sylvia my professional alumni greeting and then turned to introduce myself to Angela Williams.  Now, I felt like saying "what's up sister girl?"  But, I maintained professional alumni decorum.  Angela was wearing the purple U.E. colors as she always did.  Angela always wore the school colors well, better than most alumni or U.E. staff.  I sometimes wanted to ask her, "Where do you shop at?"  Anyway, I recall Angela's first words to me were, "So, what brings you back to U.E.?"  Over the years I would joke with Angela that her first words to me were "What you doing back here fool?"  That would make her laugh, showing that big smile of hers. 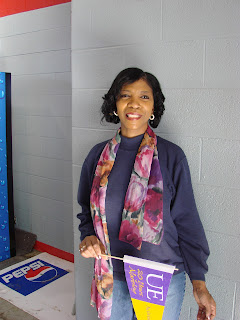 Back in those days I was doing some research on the history of black students at U.E.  Each time I came to campus I made it a point to stop by and say hello to Angela and invite her out to lunch. We were about the same age and shared our life story with each other and the variety of challenges we had faced.  I discovered that her life had been more challenging than mine.  I recall one day I told her let's do dinner and a movie this time.  After a nice meal, we wound up just making it to a showing of the movie "The Bucket List" starring Morgan Freeman and Jack Nicholson.  Well, the plot of the movie has several emotional moments and between Angela and me there were tears being shed by the film's end. So, Angela reaches into her purse and gives me some tissue to wipe my tears!

One day I noticed she had signed an email with the name Honey Angela Williams.  I asked her "is Honey your nickname?"  She explained that was her real first name and that only family called her Honey.  I told her one day I was going to walk into her office, when Sylvia was present, and say loudly, "Honey, let's go to lunch!" and then I would turn to watch the reaction on Sylvia's face.

I was always impressed by Angela's devotion to her daughter and Angela's strong faith in God.  I recall after a Dr. King march from the U.E. campus Angela was overseeing her daughter on the bus back to campus.  It was clearly evident her motherly love and devotion to her daughter was very strong.  With my job changes and relocation I lost having consistent communication with Angela for a year or so. When we did reconnect it was very apparent to me that her faith in God had gotten stronger and I made that comment to her.  I recall one time I sent her a message through Facebook asking a religious question.  After several minutes she responded to my question.  Her reply must have included quotations from 10 scriptures!  I said to myself, "She should be a minister!"  It was during that time when Angela published her book of poems.  I eagerly ordered a copy to support this woman of God.

I found out in mid February 2017 through the UEAAA Facebook page that Angela had left this world. Ironically I had just put myself on a self imposed 2 week vacation from Facebook.  But, I kept seeing notifications pop up from the UEAAA page and wondered what was going on.  Angela worked at U.E. for a long period.  While some came and went, Angela remained at U.E.  Always loyal, always devoted to getting the job done.   I recall last talking to her in December 2016 during a teleconference about the mentoring program she was attempting to get started.  Her bubbly voice, would make you smile if you were having a bad day.
Angela Williams was a pivotal person in the operation of UEAAA as an organization.   She was the inspiration for me to revisit and update our UE black student history.

This world needs a million people and more like Angela Williams.  I was saddened to hear she was gone. But, I know her faith has her in the ultimate place we all aspire to be when we must depart this life. She earned it.  Well done Angela.
Posted by Arnell Hill at 3:27:00 PM No comments: