Leadership.  That is one trait that we look for in those running for public office.  The ability to work with others to identify options for easing the pain that life sometimes brings us, is another trait we should look for.  The desire to listen first to understand what people are concerned about.  People should not seek an office because they think they have solutions to the problems of the world.  We all know that human beings can not create solutions.  We only create a process by which some will gain and others will not.  How is that a solution?

If an elected public servant does not demonstrate the above traits, especially after having served several terms in their current position, they should not be reelected.  Such is the case with Susan Brooks.  Her fear of town hall meetings with her constituents does not warrant her being given another 2 year term.  Her views that citizens who decide to take drugs, not being forced to take drugs, should be treated as if they have a disease does not warrant another term in office.  Yes, people make mistakes, but why single out a specific class of people as needing help?  If that is Ms. Brooks views, will she next seek leniency for those who commit crime because they are caught up in a crime epidemic?

Yes, Susan Brooks seems comfortable meeting with groups who have a specific interest?  But what about those who are not part of an interest group?  A town hall where every day citizens can just express themselves is what she never gave us.  So we should choose not to give her another term in office.

Dee Thornton presents an influx of fresh air and untainted viewpoints.  She just wants to be of assistance to people in the 5th District.  Two years.  That is what we should give her to allow her to demonstrate that she can do better than Susan Brooks.

Look up one of Dee Thornton's donuts with Dee events.  Go hear her speak and ask her your questions unfiltered by a staff member.  Dee deserves a chance to represent the 5th district.  Give her the opportunity.  Vote early, tell your friends to vote.  Vote for Dee Thornton for our Congressional Representative in the 5th District in Indiana. 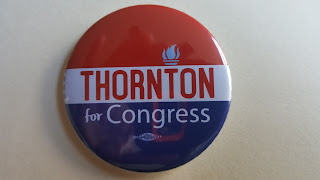