He did it.  In Louisville, Kentucky Muhammad Ali brought us all together.  At his memorial ceremony were people of different races, religious beliefs, and political parties.  Women, men, children.  All gathered together to pay homage to a man who really was the people's champ.

I ventured to Louisville twice this week. Departing my home around 4 a.m. on Wednesday I made the two hour journey to stand in line with many others to pick up my allotment of 4 of the 14,000 free tickets Ali had made available to the public for the Friday memorial service.  My early arrival resulted in my being able to receive my allotment of 4 seats.

As I expected after all the tickets were handed out in about 1 hour, a few people attempted to sell their tickets for money.  Journalists were quick to pick up on the story including one from the Louisville Courier.  I responded to that journalists and offered to work with him to give at no costs two of my tickets to someone deserving of attendance at the service.  I waited.  No response from the journalist. So I sent him another email.  This time he responded saying he had been busy and not able to respond to my message.  He then said he would not be able to assist in identifying any one in particular I could connect with to give them my tickets.  I thought "typical journalist.  Quick to write a negative story, but too busy to do the work to bring a happy ending to a negative situation."

Myself and a friend departed for Louisville around 4 a.m.  Friday morning to park downtown in a prime parking spot I had found Wednesday.  Instead of going to the remote free parking area identified for those attending the ceremony, I wanted to be be able to walk to the funeral procession and the ceremony. That plan worked out well.  The environment around the KFC Yum Center even in the early morning was amazing to see.  News correspondents and various networks had camera crews in position to report on the event.

After having breakfast we walked to an area where we could watch the Ali funeral procession as it made Ali's last tour through Louisville.  I met several people from Great Britain who had made the trip across the Atlantic Ocean to pay respects to Ali.  While awaiting the procession to arrive I met a gentleman from Iowa.  I also took part in a conversation with a black physician who with his wife, a former Federal employee, had driven into town for the funeral procession.  I still had the two extra tickets to the memorial ceremony in my pocket.  I had told my friend earlier that I wanted us to give them to someone who didn't have tickets to the ceremony.  I offered the tickets to the physician.  He was surprised of course and when he told his wife she was brought to tears.  So much for needing the assistance of a member of the press to do a good deed.

The funeral procession arrived shortly thereafter.  It seemed to glide quietly off the interstate off ramp down onto the street level where a large crowd had gathered.  The crowd surged towards the street starting a chant of "Ali, Ali, Ali".  I noticed the diversity of people in the crowd.  Ali had brought us all together were my thoughts.  For a moment in time we had something in common.

At the memorial ceremony the theme of Ali uniting us together continued.  The diversity of speakers talking about Ali was noticeable.  Native Americans, a Republican Senator, members of various religious faiths all together sharing the same stage.  Muslim greetings and prayers being sent over the networks covering the event, from an arena in the United States of America.  This was the best of what America in it's present form could be.  A peaceful gathering of the variety of people in this world who had come together for a common purpose.  Ali did it. 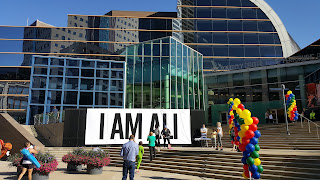 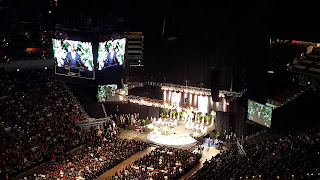